This project turns RVR into an autonomously driving robot that avoids collisions with walls and other objects 💥. In this tutorial, we'll attach HC-SR04 sensors to the front of the RVR that will send out waves and time how long the waves take to return (after bouncing off of an object in front of the RVR). When the time to return dips below a certain point, we'll turn the RVR to avoid the obstacle.

This intermediate tutorial should take about 30 min to complete (if you've already set up your Raspberry Pi and connected it to the RVR). 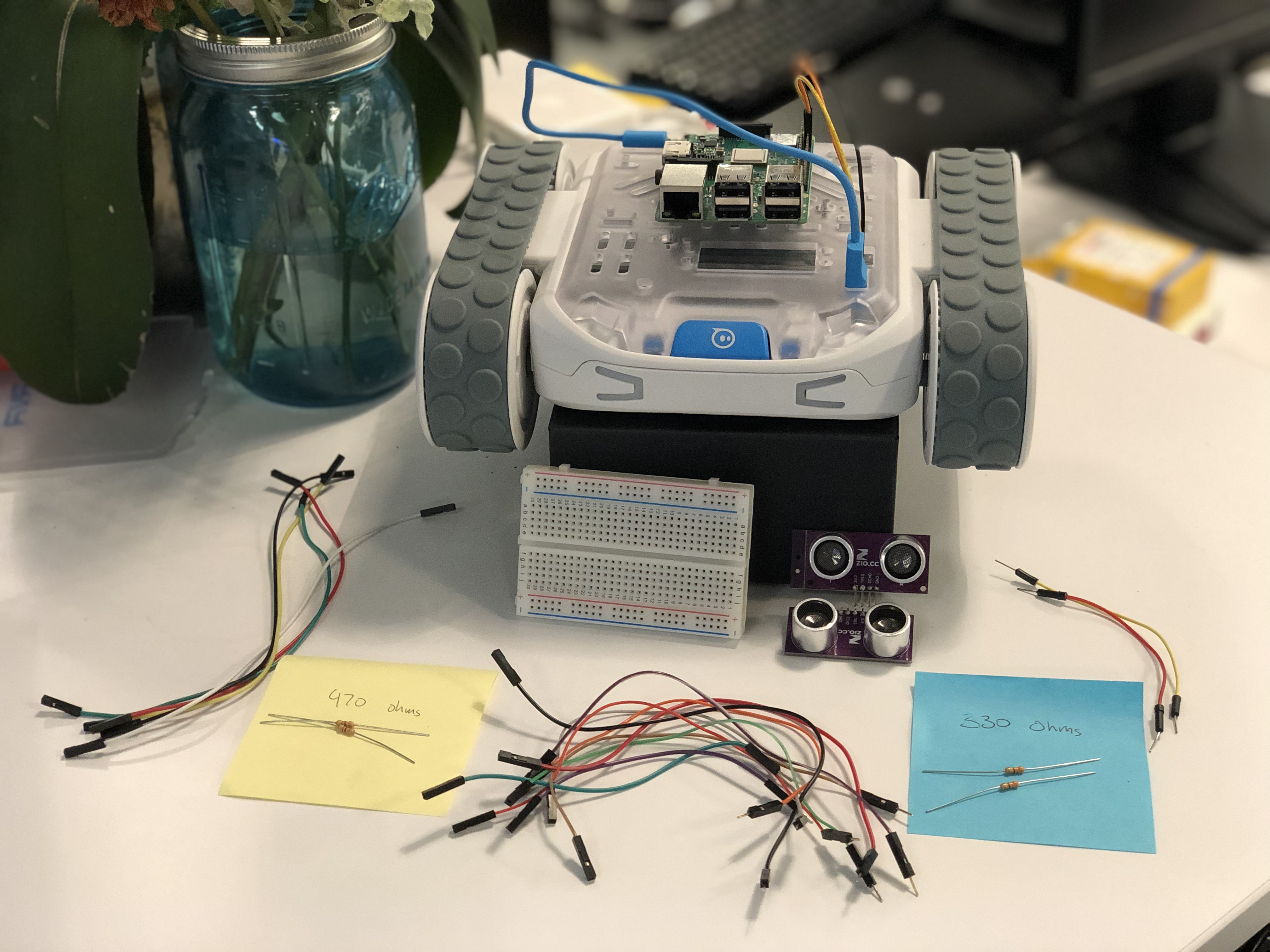 Note: The HC-SR04 ultrasonic range finder is very simple to use, however the signal it outputs needs to be converted from 5V to 3.3V so as not to damage the Raspberry Pi ⚡ Hence, the need for resistors. 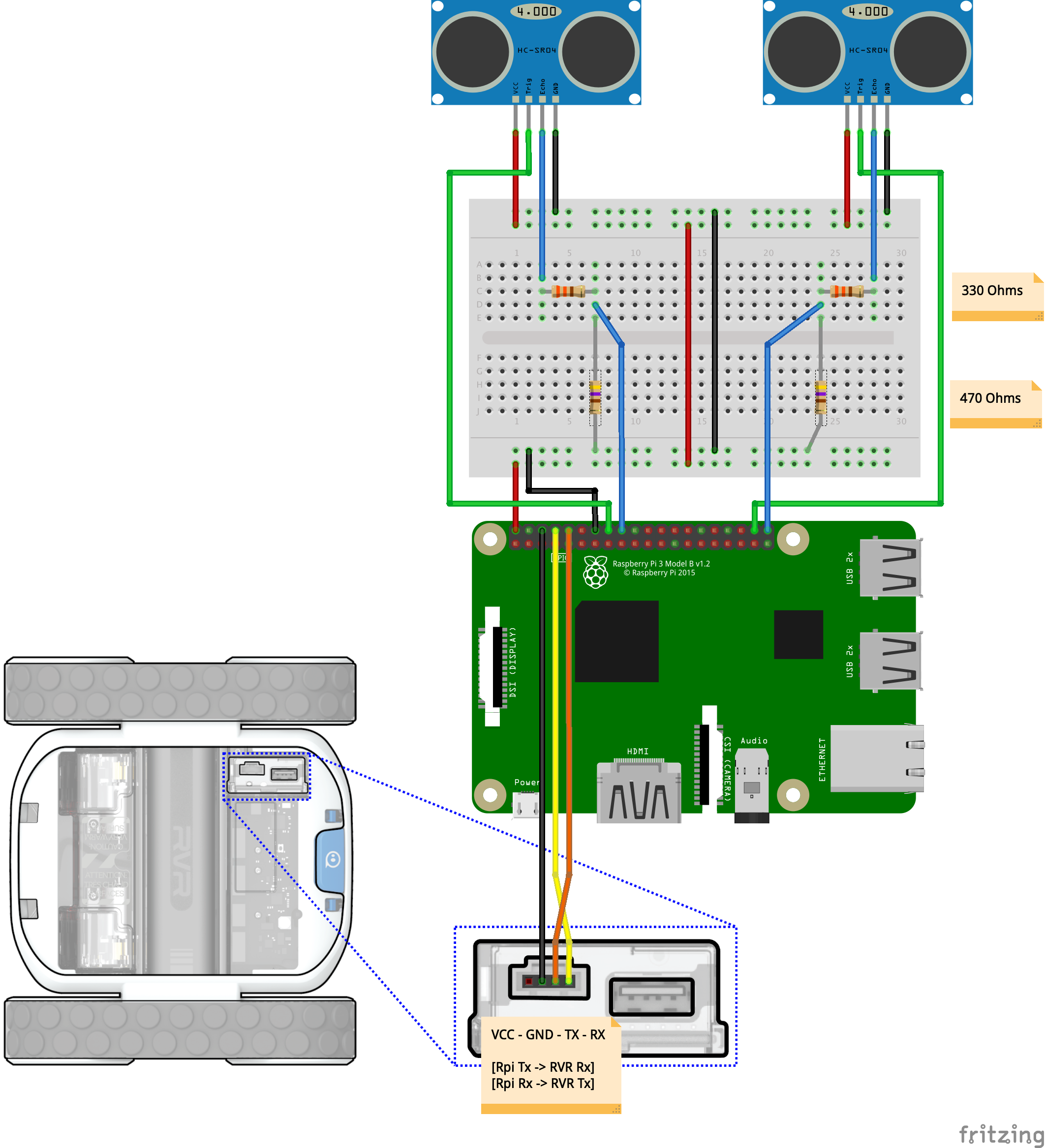 The code is already configured to use the pins specified in the diagram. However, if you'd like to use other pins, please be sure to update the pin assignments in the pin declarations 👩‍💻.

For a complete reference of the pin layout on a Raspberry Pi 3, see here.

Mounting Suggestion (your design can be much prettier 🌈)

You'll want to mount the Ultrasonic Range Finders on either side of the front of your RVR (without them touching the treads, we wouldn't want them going flying! 🛸). You'll then just need to find a secure (enough) way to mount both your Raspberry Pi and your breadboard on top of your RVR 🎢. Here is what we came up with: 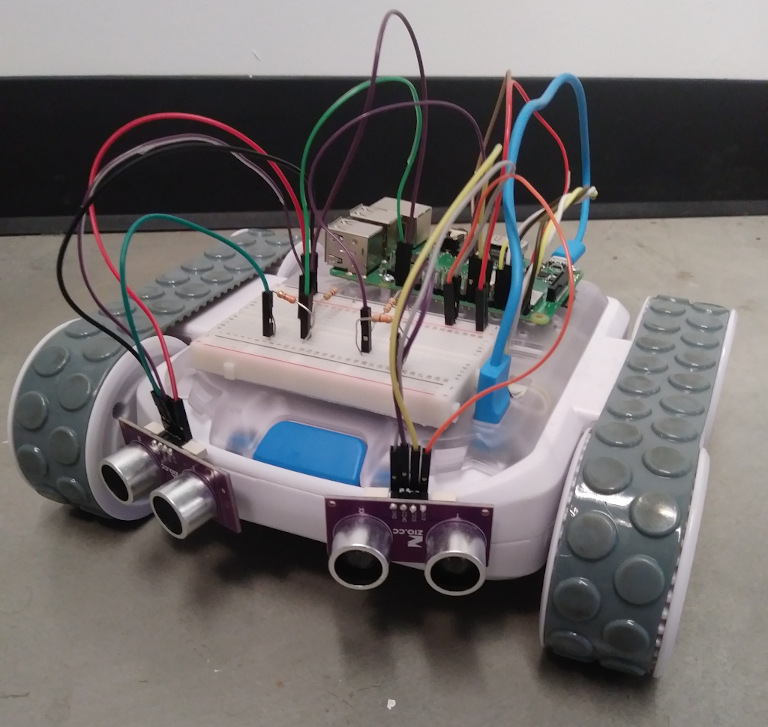 You can find the file for this example at /projects/ultrasonic_rvr/ultrasonic_rvr.py, in the file structure you downloaded; we'll repeat this later as we talk about how to actually run the code, but figured you might like to have the file in front of you as you follow along here...

Let's get started with our imports. Most of these should be pretty familiar from other examples. Line 3 of the code below is what allows us to pull from elsewhere in the file structure. It references files that are two layers above (../../), as well as those within folders at that level, and appends the absolute path of the directory with the name after from in the imports on lines 7-9:

Next, we'll initialize our global variables, including a specific asynchronous loop 🔄 and defining rvr 🤖 so that we can use it to call commands off of, later on. We have the ever-familiar setup of creating an asynchronous loop and a rvr object, but we have a few newer things here, as well. The triggers and echos are going to be the pins we'll use and we let the Raspberry Pi know about that by feeding it through GPIO:

Last, but certainly not least, we'll set up our main function, which is the heart and soul of our program 💓, letting it know when to execute which functions. We start by waking the RVR so that we can ask it to do mechanical things; if the RVR is in soft sleep, we can still ask it for information about itself, but we can't ask it to do anything. We then use reset_yaw to tell the RVR that whatever direction it is pointing when it wakes up should be considered 0° (forward).

This code also controls the turns that happen when either side detects that something is too close. If the distance on a side gets below 35, we use the raw_motors method to turn the RVR to avoid the obstacle and also print an alert to notify the user that we are doing so. Finally, if both sensors are happy, we just drive straight ahead using the drive_with_heading method:

To run the code, you simply need to go to your terminal, cd into the correct directory (/ultrasonic_rvr) and type:

Write down the IP address it spits out and let's jump over to the machine you'll be using to control your RVR!

If all went to plan with that, you should get a success message and be ready to cd into your /ultrasonic_rvr folder and run:

Once this is running (ie the command above didn't result in an error), your RVR should start doing its thing; stand back and be amazed! Whenever you are ready to stop it, pressing any key should do the trick.

Try to improve your Ultrasonic RVR! Here are some ideas to get you started: