In this example, we'll utilize the micro:bits' abilities to communicate with one another, as well as the built-in buttons to control our RVR wirelessly! We'll give the RVR its own micro:bit and use a second micro:bit as a controller to cut the physical ties between the RVR and that which is controlling it.

This example should take about 45 min to go through before you are ready to hit the road!

If you haven't already set up your micro:bit and favorite editor, it's probably best to take care of that before jumping in here. Feel free to check out our Getting Started docs on: 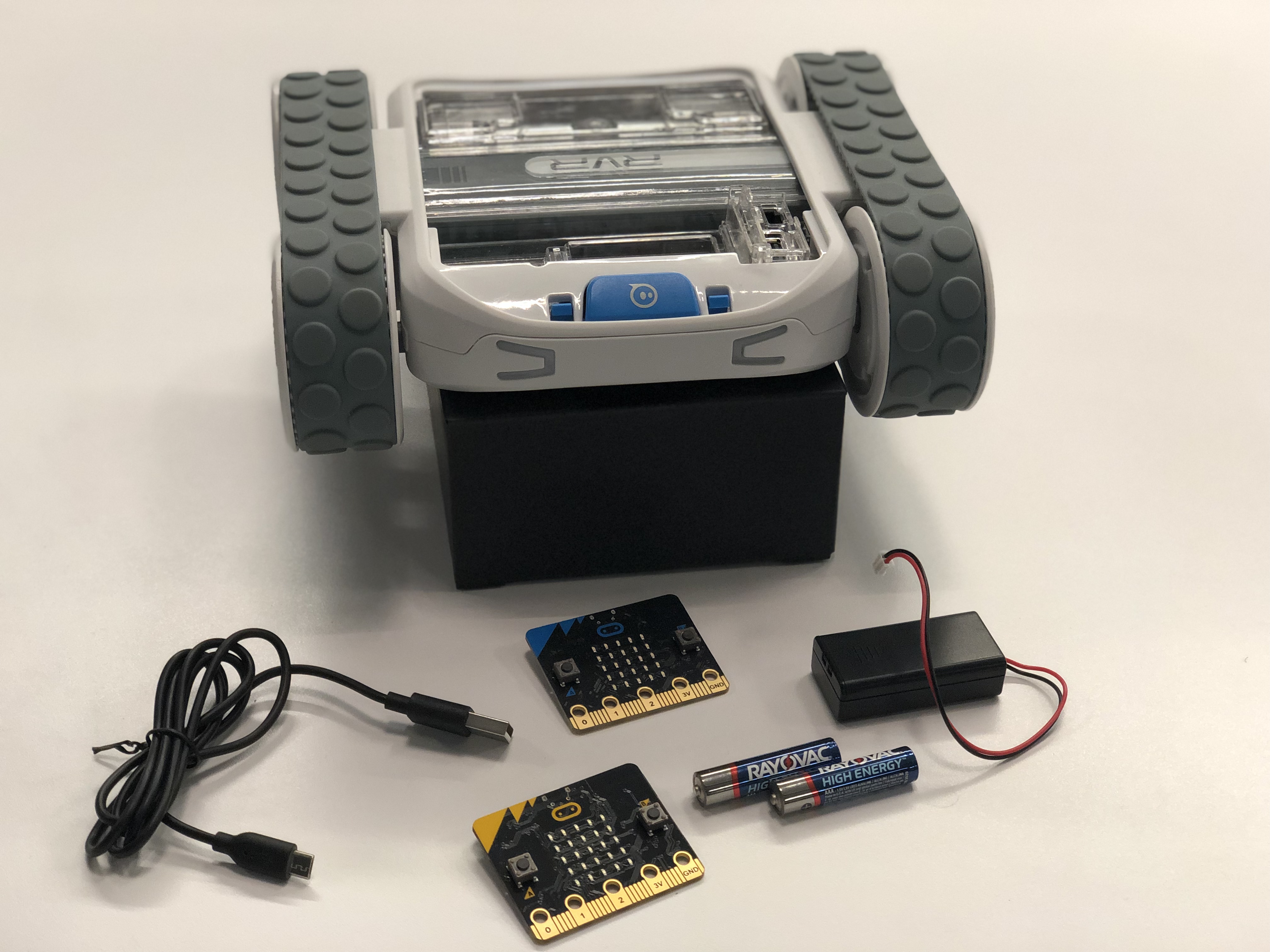 If you want to build your own Radio Control RVR, you will need the following parts (most of them are included in this nifty "inventor's" kit from SparkFun):

The code is divided into two folders: transmitter and receiver. Let's explore the code a bit and then we'll walk through how to flash the code to the respective micro:bits.

Let's get started with our imports. One of the coolest things about micro:bit is that it has (A and B) buttons built in, so you don't need additional components to be able to give it inputs. This allows us to use the micro:bit, itself, as our "transmitter".

We'll import the buttons, so that we can use them for our code and will also be using the display on the micro:bit, so we'll import display and image, too:

We start by configuring the radio (so the micro:bits can talk to each other):

And initiating that neither button is being pressed at the start of the program:

The control code is simple. We start by setting the values of the variables we initiated earlier (a_pressed and b_pressed) to functions that trigger when a button on the micro:bit is pressed (is_pressed).

If only A is pressed, we will display an arrow for the direction the RVR will head in ('W' or left) on the micro:bit and will send a string of 'a_pressed' to the receiver (we'll address how the receiver interprets that string in the next section).

In the next bit of logic (if the previous was untrue), if only B is pressed, we will display an arrow for the direction the RVR will head in ('E' or right) on the micro:bit and will send a string of 'b_pressed' to the receiver.

If neither of those pieces of logic were true, we check if both A and B are pressed then we display an arrow for the direction the RVR will head in ('N' or forward) and send a string of 'ab_pressed' to the receiver.

Our final condition is for the case in which all buttons have been released, in which case, the micro:bit displays a downward arrow (signified by the letter 'S') and a string of 'not_pressed' is sent to the receiver:

Now that we've gotten that sorted out, let's dive in to the receiver code...

Let's get started with our imports. We'll be using the display on the micro:bit, so we'll import display and image and this is where we'll actually make the RVR drive, so we also import RVRDrive from sphero:

Once again, we'll configure the radio (so the micro:bits can talk to each other), and we'll also set the RVR's "compass" so it's current direction is "forward":

We'll initialize all our parameters, stating that the RVR is not moving and is facing forward. We'll also set the rates for how fast the RVR turns, how fast it accelerates and how quickly it decelerates:

In our next logic block, we ensure that the speed does not dip below 0 or go above 225.

Once all of the data has been collected, we have the RVR drive in the heading we landed on at the speed we landed on:

Let's get flashy with it!

While we did just walk through the two code files specific to this project in detail, it may be helpful to use the ones we have stored in our GitHub, since you'll also need our more generic sphero.py program to make the receiver work correctly. As you might have guessed, the code contained within each (transmitter or receiver) folder gets loaded onto the micro:bit you want to act as the either transmitter or receiver.

There are a couple of ways to compile and load code onto a micro:bit:

Note: The receiver program requires loading both sphero.py and main.py onto the micro:bit. Mu Editor is better suited for this.

If you run into any problems with your flashing, feel free to check out our Getting Started article on flashing to micro:bit.

Start by downloading the main.py and sphero.py files from the receiver directory on GitHub. main.py is the file that will run on the micro:bit, and sphero.py contains the functions you'll need to be able to interact with RVR using your micro:bit. You'll notice that RVRDriveis imported from sphero.py at the top of the main.py file.

Hardware Setup (Plugging Everything In)

To complete the RVR setup, you need only connect your receiver micro:bit to your RVR using the Data-Enabled Micro B USB cable:

For the controller (transmitter), just pop your batteries into your battery pack and plug it in to the JST connection port on your micro:bit: 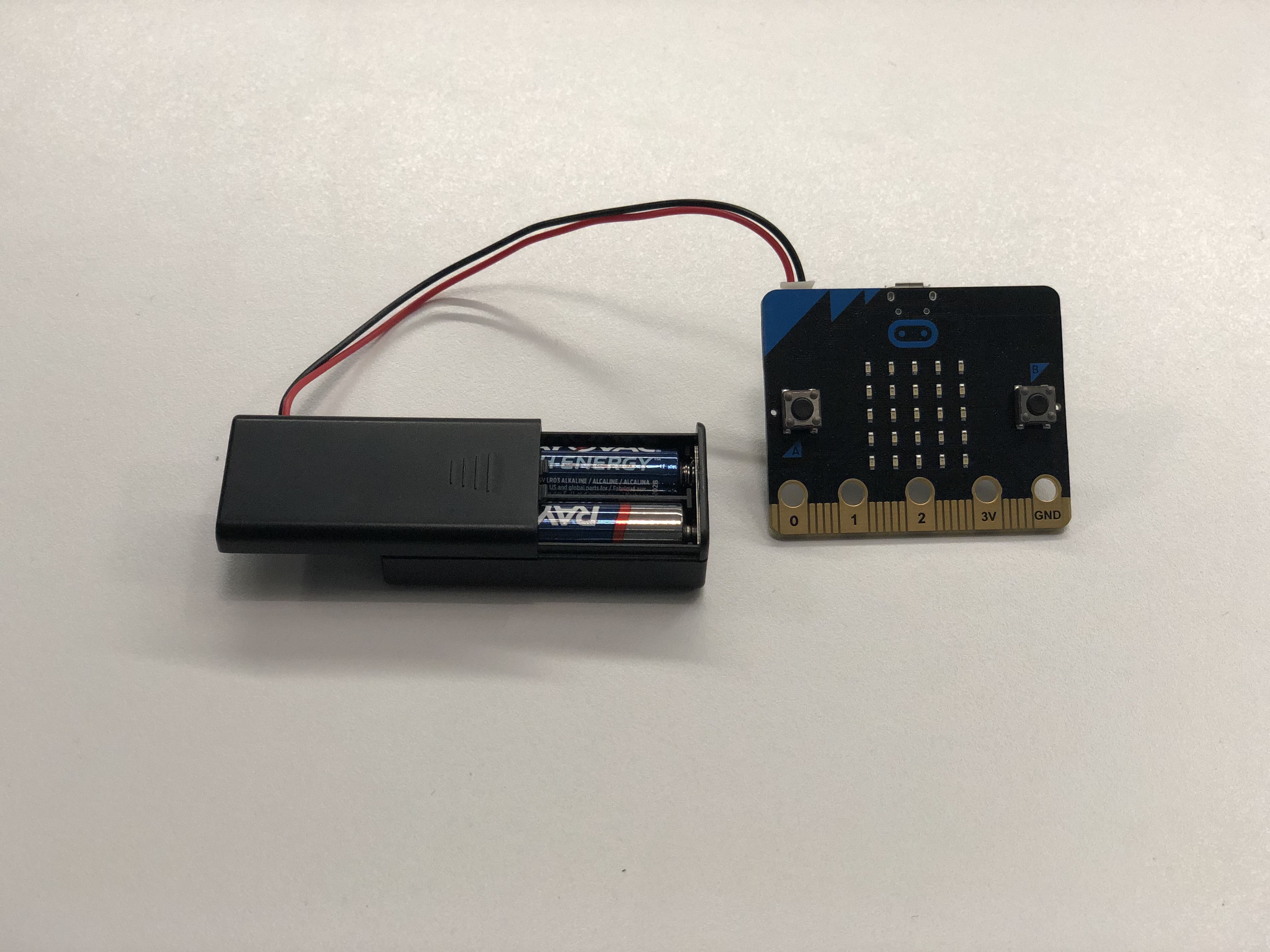 Once both micro:bits are powered, they will both display an arrow pointing down; this means you are ready to roll!

Try to improve your Radio Controlled RVR! Here are some ideas to get you started: